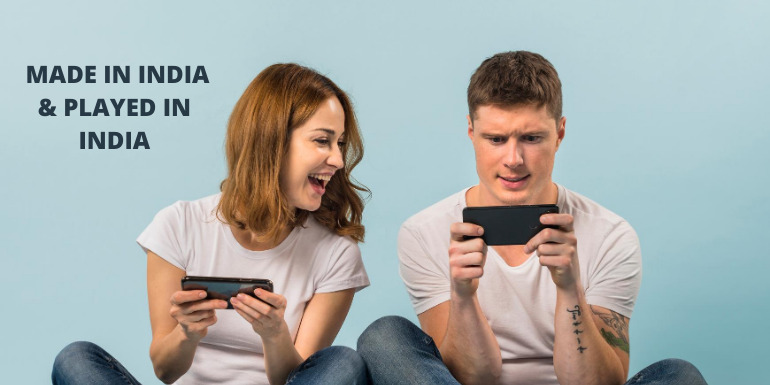 GAMES THAT ARE MADE IN INDIA & PLAYED IN INDIA

In the previous few months, the call for home-grown has increased rampantly with the growing anti-china feeling in the nation. Not only apps, but people are looking for Indian creation of games on their smartphones and are willing to give it a try. There are few ‘made in India’ games that have many downloaders and has also successfully impressed the critics. Some of these apps have gained popularity from the lockdown imposed by the government due to the Covid-19 pandemic.

Here’s a look at the Indian games available on smartphones which you may give it a try.

Cricket is considered as a religion in India. Most people know the rules of the game and don’t bother themselves picking up the bat or ball every once in a while. There are other cricket games available too but real cricket has gained popularity over years. Nautilus mobile enjoys the possession of real cricket. The game has also won several awards like ‘People’s choice game of the year – 2014’, ‘Indian gaming week sports & Debut game of the year – 2015 & others.

The updated version of the app i.e. Real cricket 20, entertains more than 10 million users and has a rating of 4.1 on Google play store. The game is played online and offline both modes. It includes features like ultra edge, hotspot, and female contemporary two players vs. two players’ online mode. Real cricket allows you to take on any challenge from the shortest format of the game to the longest.

Owned by Himanshu Manwani and Govardhan Gosavi of Xigma games the bonfire: forsaken land is free to play for the first few days. To play the entire version of the game, you have to play four dollars (Rs 300 approx.) The game has won several accolades like ‘Google play best of 2019 winner for best indie 2019’ and others.

The game lets you to create your resources, manage workers and survive monster attacks at night. It’s the kind of game which will have your attention for a long time. Because of its well-crafted landscapes, the game looks beautiful. The game takes 90 MB of your internal storage and has been downloaded by more than one million people despite the price tag. It has a rating of 4.1 on Google play store.

Indian Air force: A cut above

Indian air force: a cut above was launched in 2019 and lets the user play the role of an IAS officer. The graphics look beautiful for the 349MB of space it takes on the storage.

User starts learning by how to fly followed by 10 missions with different objectives. The game is engaging as it has over million downloads on Google play store and a rating of 4.7.

Ludo king came out as a lifesaver for people who were trying to make most out of the lockdown time by playing the old school board game, Ludo on their smart devices. The game not only lets you play but chat with your friends as well with stickers and in-game chat. You must have shared screenshots of your game results on Facebook or Instagram stories.

The game is maintained by Gametion Technologies Pvt Ltd and has over 100 million downloads and a rating of 4.2 on Google play store. As the game takes much less storage so, it can be played on almost every basic Smartphone.

Parking frenzy 2.0 3D is a low-graphics imitation game in which you have to drive through narrow lanes; obstacles to reach the spot or finish the mission in time which is pretty much similar to Indian roads. The game is distinct and has 70 plus levels of city driving and 20 plus challenges.

A user can choose 15 different cars to drive. It takes 75 MB of your Smartphone’s internal storage, has over one million downloads and a user rating of 4.3.

So, there was a list of best games made in India and played in India. Hope you enjoy playing it. Keep gaming!